HM the King presides in Casablanca over the launch ceremony of 26 industrial investment projects in the automotive sector, for a total of 13.78 billion dirhams

Casablanca, 11/12/2017 - His Majesty the King Mohammed VI chaired on Monday at the Royal Palace in Casablanca the launch ceremony of 26 industrial investment projects in the automotive sector, for a total of 13,78 billion dirhams. 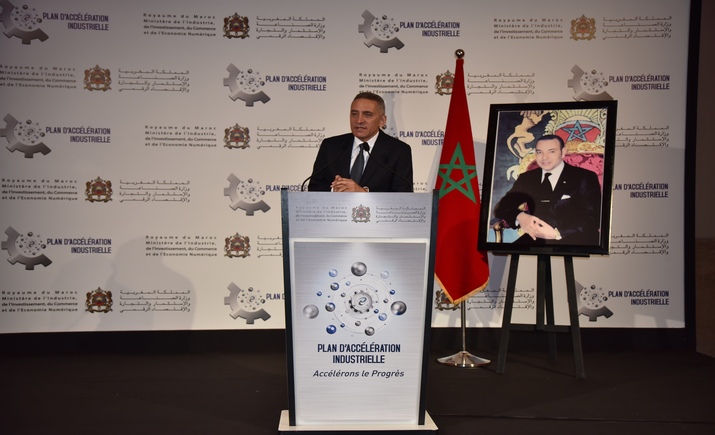 These investment projects demonstrate the confirmed positioning of the Kingdom’s industrial sector on high added value activities, as well as the trust that reputable international operators bestow on the National Industrial Program. They also testify to the on-going evolution of the Kingdom’s industrial dimension as it manifestly evolves into a solid economic model and moves towards the community of emerging nations.

The Minister of Industry, Investment, Trade and the Digital Economy, Moulay Hafid Elalamy, delivered a speech in front of HM the King in which he stressed that "the successes achieved in the industrial sector in general, and in the automotive industry in particular, are the fruit of the vision mapped out under the leadership of his Majesty the King, may God assist him."

“The Industrialisation Acceleration Plan and the Ecosystem approach have proved to be true drivers for the industrialisation acceleration in progress”, added the Minister, noting that the 26 investment projects launched in the automotive sector introduce new specialisations in Morocco, strengthen local integration, intensify the productive fabric, respond to a need that was previously satisfied through imports, and will generate 11,568 direct jobs.

Among the 26 investments projects, 6 form part of the implementation of the Renault ecosystem, which is developing a global supply platform based in the Kingdom. Thanks to the structuring of this substantial ecosystem, the manufacturer currently sources one billion euros worth a year of machine parts from Morocco thus achieving a local integration rate of 55%.

Since their launch in October 2014, the Ecosystems have allowed the creation of more than 80,597 jobs, representing 90% of the target set for 2020. In 2016, they generated an export turnover of 60 billion dirhams, representing a 50% increase in comparison with 2014.

The automotive industry fully embodies the tangible result of the Kingdom’s industrial strategy. It is now well rooted and its impact is expanding more every day.